Ok GridCast fans let’s take a look at the recently announced changes for the 2015 season.

Since Grid is still a very new sport, less than a year old, it’s important to try to understand some of the basics. So, we’re going to do our best to make all of this make sense to the fans by comparing certain rules and changes to other professional sports. (By the way, we’ll be doing analysis and commentary after the matches during the 2015 season…separate from our podcasts).

Each match consists of 11 races. This is comparable to baseball, where each game has 9 innings. So, each race is just a small segment of a larger part which is the match. 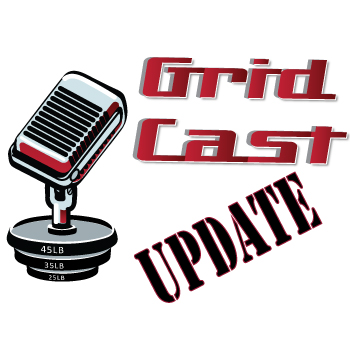 Each team will now consist of 18 players on a roster. During the inaugural season, there were 20 players for each team, 10 players started and 6 were on the bench. That means the 4 remaining players were the equivalent to “practice squad” players on an NFL team. This year, a full team roster consists of 18 players. Of the 18 players, only 14 dress for each match with 10 starters, who are 5 men and 5 women. This means, instead of 6 players on a bench, they now have only 4. Also, and very importantly, last year, if a player was injured during the course of a match, a team could activate a non-dressed player from the “reserves” to fill in for the injured player. This, in essence, allowed all 20 players on a team roster available for the match. This is not allowed for the 2015 season. If a player is injured, then they are injured and the team is down a player for the remainder of the match.

This is great news. This rule change falls in-line with other professional team sports. If an NFL team dresses 2 quarterbacks and the first one is injured and the back-up is not playing well at all, the team is stuck with that backup quarterback. This means the players on the bench have to be very high quality, because you never know when they are going to need to be used. This problem also comes up in professional baseball when a coach/manager replaces pitchers frequently during a game. Once a player is substituted, they can’t come back in during the match. So, if the game goes into several extra innings and you’ve exhausted all of your pitchers, what do you do? These complications make the match difficult for a manager, which means, there are more risk/reward situations built into the match, thereby making it more interesting for the fans.

How can this be made even more interesting?

The NPGL went a little further by requiring that on a team’s 10 person starting list, which consists of 5 females and 5 males, they must also have 2 athletes, one male, and one female, over 40 years of age. This means if a 40+ athlete is injured during the match, then another 40+ athlete must replace them. However, there are no reserves. This means the teams are going to have to decide how many of the benched players are going to be 40+ athletes. If a team goes with one male and one female 40+ athlete on the bench, that means only 2 players are left for substitution during the course of a match that aren’t 40+ athletes. You can see the different complications this makes for a team.

We look at each player as having specific roles. For instance, in baseball there are outfielders, infielders, pitchers, and catchers. In Grid, while every player is allowed to play all positions, you’re going to have specific players who specialize in a skill set. For example, Irving Hernandez from the New York Rhinos is said to be a body weight specialist and Taylar Stallings from the DC Brawlers is considered a barbell/strength specialist. What would you do if you need to substitute one of the specialty players due to injury or because of the structure of the next few races? We think this means the bench players must be very well-rounded players who aren’t specialists in one way or another. They have to be good “utility” players. This will highlight the importance of the specialty players who are playing during the matches and they must be able to do other movements as well.

Another rule change, which we don’t think will be a huge factor, is that you can’t sign new players or trade players during the course of the season. The only exception is a season ending injury to a 40+ athlete.

What is abundantly clear is that personnel roster decisions made by a coach or team management impact a team’s effectiveness greatly, not just for one match but the entire season. It will be exciting to see what the different teams do for the 2015 NPGL season.

Stay tuned for our first episode; you’re going to love our first guest…we’ll announce who it is next week. Also, head over to www.TheGridCast.com and sign up for our newsletter so you can be the first to know when a new episode drops.