The GridMaster has spoken from high atop his/her perch… but I hear but a whisper. Why? Because the GridCast is ready to throw their hats in the season predicting ring. Let me tell you guys something, you can’t go by just “data” to figure things out. Why? Because teamwork, communication, and “sense of family” plays a big part in this as well. Also, not everyone can be first. I like all the teams, all of the players, and I get along with all of the coaches. But I can’t come out here and say everyone gets first. That’s boring. So here are my bold predictions. Prove me wrong! With all that said, here’s how I see 2015 going down. 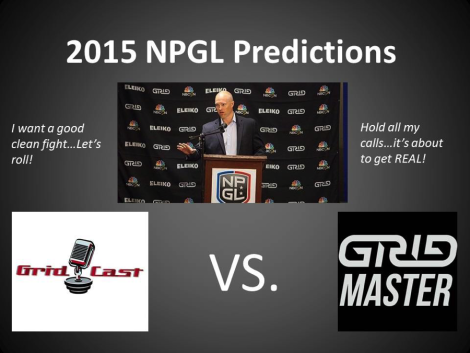 Bringing up the rear, we have to hold our hands over our hearts and give a solute to last place Baltimore Anthem. Why? Well, it’s all about gelling as a team. Being the new kids on the block, it’s going to be hard for them to catch up to the experience the other teams already have earned. Does everyone remember the first couple of matches for every team last year? It was a disaster for many of the teams. I totally understand Baltimore is star studded with an A-Roll cast, but getting them to communicate and gel as a team this quickly is going to be a real tough battle and mountain to climb. Sorry Garrett, I hope you prove me wrong.

In a New York minute this could all change, but I predict the Rhinos charging into 7th for the 2015 season. I just haven’t seen enough change for the team to make a big difference this year. Perhaps a mid-season team-building throw-down in Iceland will change my line of thinking, but as of right now, I don’t see how they are going to get on top of the food chain.

In 6th place, I hate to Reign on their parade, but I see the LA Reign’s lights a little dimmer than the rest. They may feel like Royalty with their functional fitness celebrities, but I can’t see them winning more than 1 regular season match, but bey, at least it’s better than last season…and we all know that Noah’s dome will look glorious the whole time without a hair out of place.

Like a hurricane coming up from the Caribbean, the Miami Surge will be on top of the bottom of the pack. So…basically average. Now that’s not to say they have an average group of all-stars. They just have some growing to do. Willis McGahee struggles with his form, but his brute strength and explosive speed are undeniable. It’ll just take some time to develop. While Doug Chapman had proved himself as a coach in the functional fitness world, he hasn’t had the experience in the GRID arena. It’ll take a couple matches for him to get the hang of it but by that time, it’ll be too late.

In fourth place, dropping anchor in the middle of the pack I see the Boston Iron holding strong. My tendency is to want to place them higher. Coach Plosker has the right mindset for the team and has already conducted a mini camp before the draft even started. But I can’t see them beating the remaining teams on the table. However, with that said, they are a young team. A young team that can develop over time and really show strength in the future. I think 2016-2017 are going to be scary good years for Boston.

Rising from the ashes I see Phoenix solidifying their hold on the proverbial podium in 3rd place. How can you doubt Opex? You can’t. Also they have added some real studs and studdettes to their roster and I only see them behind the top two teams and dominating the rest of the pack.

In second, much like last year, I see the SF Fire putting out the flames of the competition and continuing to build a golden bridge to the future. The team hasn’t missed a step from last year. They are still very strong, their transitions are flawless, and the support of their management staff is bar-none top-notch. Players will play for their team when they are treated to spa days and team building get-togethers like they do in San Francisco. I only see them losing to the Brawlers in a championship rematch like last year.
That’s right, you guessed it, I’ve picked the Brawlers fighting through the crowd, and thrusting their fists upward while hoisting up the Pinnacle trophy. Why? They added to their female strength with Becca Day… Justin Cotler still throws bottles better than the rest, while singing melodic sweet nothings into his player’s ears. While Lindsay Menery’s forced medical retirement will hurt the team, I have every confidence in Cassidy Lance. With the passion behind Cotler, the strength in their men and women, I can’t see how the Brawlers don’t battle it out to the top of the pack once again.
I know many of you will accuse me of being a homebody, but I need to remind everyone that I have a friend on the Baltimore team who I predicted being in last place. I want to be wrong with that prediction because I like the team a lot, but, I have to go with my gut here and something tells me they will need some time to figure out the sport in real practical application.
No matter what, this year will be exciting and memorable. I can’t wait for it to start. So I’m calling you out Mr./Mrs. GridMaster. How ’bout a little wager? A beer to the closest predictions of the season after the playoffs and championships in Anaheim. I’m #gridready…are you?!