Throughout the history of sports, different training techniques have been used to apply certain lessons for athletes.  I remember in the 1990’s it was comical to learn about wide receivers and linemen in football taking ballet classes to be more nimble on their feet.  Culturally we have watched epic movies of athletes doing strange things like Rocky punching frozen meat in a butcher shop to sharpen boxing skills.  Recently I spoke to a hockey coach who has his players box jump from a seated position to improve their skate strengths.  This enables them to jump over fallen players on the ice and to develop explosive legs to overpower others to get to a loose hockey puck that results in break-aways.  But what do you do for a fitness competition where the movements performed on the GRID are the very same movements you “practice” every day when you train? 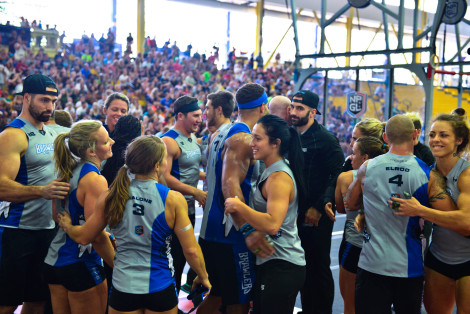 Let’s take a look at the GRID race as a whole.  Races are often won by fractions of a second.  All of the men are expected to snatch 300 pounds and clean and jerk 365+.  Even the bodyweight guys need to be strong as hell.  So, what makes one team better than any other team?  We often talk about strong females, which is true, but Boston, while they have strong females, don’t put up the kind of numbers than the New York women can put up historically… but yet again… they did this past weekend and then some on the ladder.  But why?

It all comes down to the beautiful choreographed dance that GRID makes you perform.  Just as prima ballerinas count to eight in their heads at the timing of the music, GRID athletes are counting reps, they know when to move on the surface and are well rehearsed at performing their movements to complete the dance.  The team that is best rehearsed, best choreographed, and makes the least amount of mistakes wins the match.

From what I have observed so far, you can’t just “test” athletes through a series of skills, time them, compile them into a spreadsheet and call it a day.  Yes, it is necessary to first get a broad look at your athletes, but it’s not everything.  The dance of the GRID must be rehearsed to the athlete and coach’s breaking point…yes, even the ladder.  In Olympic sports like the bobsled, skeleton, etc., these athletes look at pictures of turns on the track to visualize steering their sled for the most efficient lines.  A gymnast spends hours upon hours for a vault that lasts 2-3 seconds rehearsing body positions, visualizing them flying through the air, and remembering the coaching cues screaming through their heads. 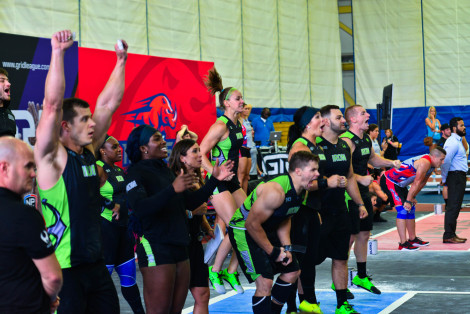 In archery or shooting there is a common saying “aim small, miss small.”  This important lesson applies in GRID as well.  The more precise your practices, the more detailed your drills, the more prepared you are in your dance, the fewer mistakes you will make on the GRID.  It’s been proven repeatedly that the team who made the least mistakes won their matches.  This was definitely the case with the Boston Iron and NY Rhinos square-off this past weekend.  With athletes similarly matched in skills across the board, it is the precise choreography well executed by the teams that win matches.  Here’s a prime example, while Boston was training at Impavidus Gym, an athlete was ascending the rope on the GRID and they smacked the bar at the top of the rope on the inside of the GRID instead of the surface on the outside bar.  Coach Plosker, red faced and full of piss and vinegar, became heated and yelled from the sideline “FAULT!  You know better than that!  Get up there and hit the right side, you can’t make those kinds of mistakes!”  That ladies and gentlemen is precision, plus it is the added HUGE benefit of practicing on an actual GRID surface and rig.  If an athlete is practicing on a different surface at a standard box and the athlete is just practicing timing, then they’re not practicing hitting the target on the GRID, the athlete’s only concern is speed.  Speaking of speed… fast is slow, smooth is fast.  This was a mantra heard over and over again throughout the week.  Teams blazing out on the surface and gripping and ripping the bars were getting faulted and would get flustered. The choreographed dance would be choppy and ill-timed, with athletes not knowing their next moves.  Smooth, confident, well executed movements won the races this past weekend, just as they were in San Jose.

We all know every single one of the athletes on the grid are incredible human specimens of strength, speed, and power.  Each and every one of them inspires all of us to be super-human.  But the execution is what was lacking in the teams who lost.  Precision comes with practice.  But not just practice.  Practice makes PERMANENT, Perfect Practice CREATES PERFECTION and right now there isn’t a team out there who is more perfectly prepared than the DC Brawlers.  The DC Brawlers spent hours by the GRID, visualizing each movement and practicing for the big dance.  Like a dance performer blindly diving her body across the stage trusting her partner would be there to catch her with precise timing, the DC Brawlers knew where each teammate was without needing to visually ensure their placement.  They just…knew it.  They knew it because of their bond, because of their perfect practices, and Cotler’s absolute demand of PERFECTION from his athletes.

For the first time in these two seasons, Boston turned a corner and learned valuable lessons this past week.  They practiced with a full Grid surface leading up to the match, coach Plosker put the responsibilities of the athlete’s successes on the athletes themselves, demanded perfection, and in turn, the athletes gave Boston their first victory.  If they can repeat this performance next weekend they might just have enough momentum to be dangerous for DC in the playoffs.  Only time will tell.

Off The Grid with Lindy Barber and Whitney Gelin